Inside Out Thought Bubbles

Inside Out Save Bing Bong 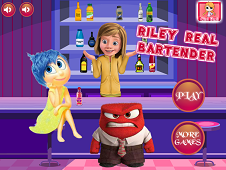 What is Riley Real Bartender?

Elsa is one of the most important character and personality from the whole Disney world and she is so awesome and incredible. Before you start playing this awesome game, you have to know that it isn't going to be about her, but about Riley Anderson, the awesome Disney animated character from the fantastic TV animated series named Inside Out! Riley was so shy when she was just a kid but right now she is so awesome and great and she is an adolescent! She just got her first job as a bartender and right now she is feeling so happy because of that. Take care and watch out because this job involves a lot of ability, skills and knowledge, of course, because she need to prepare some of the most incredible, exotic and so awesome cocktails for some of the most important Disney animated characters. For example, Elsa is going to be the guest of this game so make sure that she is going to feel great while she is tasting and drinking from Riley's cocktails, which has been prepared with your help!