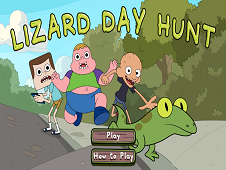 What is Lizard Day Hunt?

Lizard Day Hunt is one of the most incredible and so awesome adventure, brought by this special game only and just for you so let's get this mission done as soon as it is possible, alongside Clarence and his friends, some of the most awesome adventurers from all times. All three of them have decide that in the following they, they should go for a lizard hunt in the neighbrourhood so let's get to the work right now and get at least 10 lizards in that day! The main goal from this awesome game is to catch as many lizards as you can, but you must get at least 10 in order to accomplish the task and the target from this game successfully. They are going to be hard to catch because they will appear for a short time on the game screen so they will run from side to side and being little and fast, it will be not so probably to catch the but you have to focus so much and then you have to prove that there is no other better adventurer than you. Let's get this mission done right now and do not forget that the main thing you have to know is that you must use your ability right now!