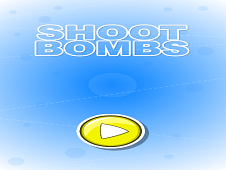 What is Shoot Bombs ?

Shooting some dangerous and powerful bombs is not as simple as it seems to be due to fact that you have to focus your shooting accuracy and shooting skills in order to make sure that everything will be alright and you won't throw and show your bombs where it won't be necessary, for making them explode when this is not necessary, because this involves losing the game. There will be some spinning objects, which will spin round and round and over and over again, with no pause and you have to shoot your bombs not through them, but throgh the empty space between them, in order to make them explode far away from here. Good luck for the last time and do not hesitate to prove that you have so much accuracy and watch out because the aiming target of the bomb will spin too permanently so it will really be a difficult task. Good luck for the last time and prove that you are the best in this amazing and so awesome shooting mission, brought by this special gaming site only and just for you. Make sure that you won't shoot your bombs only in the necessary empty spaces so this way you won't have any problems!