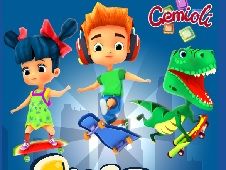 What is Skate Hooligans?

The child who is the main character of this game, has in his hand a skateboard, and a pair of headphones on his ears to listen to music, and while playing with the soccer ball he broke a window of his neighbor, and the bird that watching him sounded the alarm in the whole village and the game begins. Because he committed illegality, our boy is being followed by the police and in order to move faster, he took the skateboard and tried to run through the city as fast as possible. Here you will have to interview, as a player, you will have to help the hooligan who is being chased by the police to get rid of all the problems he has now. Although the game is inspired by the infamous neighborhoods of the cities, where we find most scoundrels, the game is a very fun and interactive one in which you will have to make quick decisions so as not to run into obstacles in your way.

The first mission you have is to collect 500 bonus points (coins) that you will see on your route in the form of gold coins, after which you will have to look carefully at the bonuses you need to collect to increase the power. Each record you make will bring you more and more bonus points and at the same time, you will be able to unlock new levels of difficulty. If you want to compete with your friends on Facebook, you will be able to log in with your Facebook account, then challenge a friend and compete with him. In order for the game to be even more engaging, our character can be upgraded depending on how much money you manage to collect along the routes. Depending on the level of the boy, he can receive superpowers as well: to go through obstacles, to fly with the skateboard, to be immortal, to collect bonus points with the help of a magnet, and many others.

After you manage to collect enough points, you will be able to change your main avatar (Max) with a little girl (Kitty), a ninja (Katsuro), a rocker (Travis), a fox (Foxy), a zombie (Shaun). ) who falls head over heels, the dinosaur Dino who is very funny, Rick who is a very cute cowboy girl, the robot Rob, the mummy Ramesses, the master Todd, the clown Charlie, the fox Lucas, the football player Rony, the alien Paul or the native Amitola.

The next thing you can do when you have the money is to go to the next level of the map, in Skate Hooligans you can choose between:

The experience of the main character from Skate Hooligans is also measured at different levels: