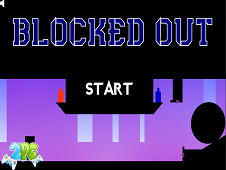 What is Blocked Out ?

Blocked Out is such a great ability and insight game, where the goal is to pick up a friend to play this game with and then try to kill each other or when it's possible, to block out the opponent in the other side of the game screen, than the side you are going. The graphics are not so complicated so there will only be two bottles, a red one and a blue one and you have to control them either using the arrow keys or using the A, S, D, W keys, depending on which one you want to control. Good luck in this cool and so awesome task and getting through different shadows and places, you need to block the other player in the other side of the game screen, activating some traps, thing possible only if you touch a special button, which allows the traps to get unleashed or the gates to open. Good luck and pay close attention to each details, trying to make sure that you will blocked out the other player, never letting yourself blocked out by the other player and in the up side of the game screen, there you can observe the score and who's leading. If both of you manage to reach in the same place at the same time, it's a draw!