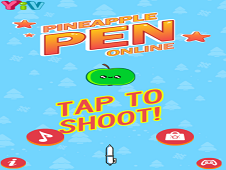 What is Pineapple Pen Online ?

Pen Pineapple Apple Pen is probably the most viral singing video on the whole Internet, at least in the last period of time so let's get to the work right now, trying to play this fantastic ability shooting game, where it's everything about shooting the right fruits, in order to sting them with the pen, making the lines from the famous song Pineapple Pen appear on the game screen, alongside an animated version of its singer. Let's get to the work right now, before there will be too late and prove that you are the greatest shoter, aiming the right fruits, apples or pineapples, and shoot them with the pen, of course, which is in the bottom side of the game screen. The fruits are up there, going from a side to another one or moving randomly on the game screen, following no logical order, but just wandering there. Good luck and pay close attention to the details, so make sure that you will also shoot the obstacles of the apple or pineapple, because at some point, as the mission gets harder and harder, the apples or pineapples get some kind of shileds so you have to shoot them more than once to get them down. Score many points and sing!