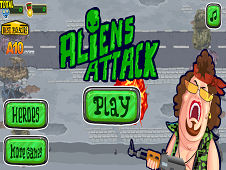 What is Aliens Attack ?

Aliens Attack is a great shooting game, but it also proposes a serious problem, due to fact that you have to deal with those aliens right now, trying to kill them all in the shortest time possible. The goal is to use the arrow keys in order to move, all over the game screen, in the bottom side of it, from side to side, in order to make sure that you'll kill all your opponents, aliens came from every side possible. Aliens are not only a lot of, but they are so well armed and organized in waves and every single wave, consists of many fighters, ready to kill and shoot humans, just like you. Do not forget that it is so important for you to strike every single alien possible, attacking them rightly and with the minimum amount of effort. Use the left and right arrow keys in order to move in the bottom side of the game screen from left to right and this way, judging by the position the aliens adopt so let's start it right now. Kill them all in the shortest time and also collect the medals left behind by them. There are some bullets launched by them too, which must be dodged by you so let's do this right now and avoid getting touched by them anyway! Start it now and be the best!