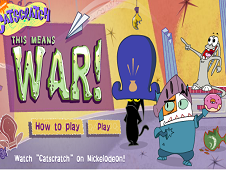 What is Catscratch This Means War ?

Catscratch is such a great fighting mutliplayer game, where you have to select one of the three cats to play with. After this, ask a couple of friends, two of them, to play this superb fighting and strategy game, where everything you have to do is to fight another cats, for getting more points than them and hurting them so much, this way winning more points than them and winning the competition. When the master isn't home, the house turns into a battlefield for the three cats of him so let's start this fight and win it with your selected cat. In the bottom side of the game screen, there is a table with so many weapons and fighting tools. Pick up from there, some pistols, guns, fireguns, laserguns and this kind of special weapons, and then shoot when it's your turn. Also, you have a couple of balloons to select after you've shooted and run as far as it is possible in a strategically place, in order to not be caught by the other opponents, if you have enough time of course, because each round has a time limit. Good luck and dodge the opponents attacks by getting so far from them and win this cats war!