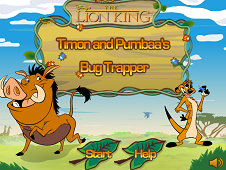 What is Timon and Pumbas Bug Trapper?

Timon and Pumbas Bug Trapper is a logic game appeared on our site where you have to do your best to avoid losing the game against your friend. You can play with a friend from the same computer and both of you will use the mouse or you can play against the computer. In this new logic game you have to play some kind of Othello with bugs. You need the mouse to place a bug. You have to catch between two of your bugs the opponent`s bugs. It is not simple because you have to think very well all the moves. In the end when there are no more squares where you can place your bugs the winner is going to be the one who has the biggest number of bugs on the table. Do not give up if you fail, if you lose. Try again and I am sure you can make a better job. In this cute game appeared on our site you will play with TImon and Pumba, our heroes from Disney. They first appeared in the Disney animation, The Lion King.