The Lion King Sort My Tiles 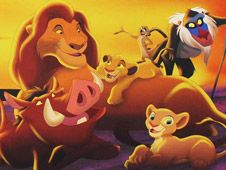 What is The Lion King?

The Lion King is a video game that was released alongside the Disney movie of the same name, with the intent of recreating its story and making it playable for the many children who became huge fans of it after the premiere, and you can now have the same experience, as that game had been emulated and is now playable online for free, on our website, directly from your browsers!

Become the The Lion King!

Simba has been outcasted after his uncle, Scar, killed his father and is now reigning over the animal kingdom, with Simba being the true lion heir to that title, so now he needs to strengthen himself up and face his nemesis, something that you will help him through ten platform-adventure levels you need to pass.

Jump from one platform to another, jump on top of enemies to kill them, or roar at them to scare them away while making sure to avoid the various obstacles and traps you find along the courses.

Use the Arrows to move, and the following controls:

Start your adventure through the animal kingdom right now, keep the circle of life going, and see why this story is still here, generation after generation!