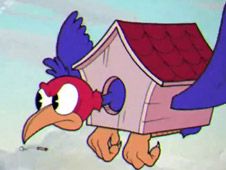 The Boss Fight against Wally Warbles from Cuphead, a level known as Aviary Action, is now available for you all to play here free and unblocked, directly from your browsers, without having to do any of the world needed to reach that fight, or downloading and playing the rest of the game, so it's great for newcomers wanting a taste of the game, as well as die-hard fans who want to revisit this awesome chapter.

From the main menu, you will choose between the three levels of difficulty, as well as if you want to use the WASD keys or the ARROW keys, using Z to confirm your choices.

We recommend the arrows, where you use Z to parry, X to shoot, C to shrink, V for the EX move, which requires you have at least one card, and Q to swap weapons.

A house in a bird will fly and shoot eggs at you, with you having to shoot missiles at it to defeat it, with the one who has their health bar depleted first losing, and the other one wins.

Of course, we're rooting for you, the player, to win against the computer, wishing you good luck towards that, and all the best time possible!