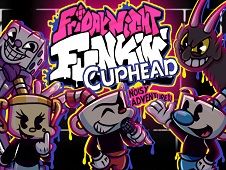 What is FNF: Cuphead a Noisy Adventure?

Cuphead - Noisy Adventure is the newest FNF game, in which you will have to transpose yourself into the world of the Cuphead character, which you definitely know from Don't Deal with the Devil.

The new Friday Night Funkin mode will have the most important characters integrated into it, namely: Cuphead, Mugman, Ms. Chalice, but you will also have to fight against the following characters: Chauncey Chantenay, Lollipop Ghouls, Chips Bettigan, Baroness Von Bon Bon, Red, Snow, Hating Simulator FT. Moawling. The action of the game is the same, but this time you will have to play with all the characters in Cuphead and try to dance as well as possible to win the heart of the beautiful Princess Baroness Von Bon Bon. The songs you will have to dance to will be the ones from the original game, which you know for sure.