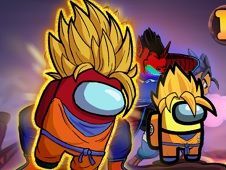 What is Impostor Z Fighting?

The newest fighting game with the famous characters from Among Us will put you in the middle of fighting, inspired by Dragon Ball Z games. As you can see, the appearance of the characters are inspired by the cartoons with Goku, as well as the fighting tactics that will be similar to the ones you already know from classic fighting games. In the game, you have the opportunity to move up and down, so as to avoid obstacles, but at the same time, you will have to use the special attacks you have, which are quite varied. You will have a choice of three different attacks.

The next attack you have will be like a pistol, you will be able to shoot magic balls at the enemies that come in front of you. In order to reach the end of the missions, you will have to pass all the tests you have and at the same time get the best score in each level of the game.

use the mouse to move up and down and the special attacks.