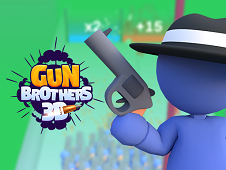 What is Gun Brothers?

Gun Brothers is a running and shooting game in 3D with stickmen unlike you've played here before, although these runner games with gates that power up or make you weaker have been really popular recently, this one up the ante on graphics, gameplay, and all-around fun, so missing out on it should be out of the question, believe us when we tell you this!

Use the mouse to drag the stickman around, or use the finger if you are playing on a mobile device, using this method to move your stickman shooter through the gates with additions or multipliers, because if you are doing so, you gain more stickmen that shoot, as you run backwards through the course.

Why backward? Because there is a large army of enemy stickmen attacking you from behind, and you need to shoot them as you move to get rid of them, get points, and survive until the end of the course, otherwise you lose and have to start again from scratch.

Well, not really, only from the beginning of that level. Avoid gates with diminishing returns, such as reductions or division, because those will make you have a smaller number of shooters, and the same is true for various obstacles that will try to cut you down along the course.

We wish you all the best, as always, and hope that you invite all your friends along for the ride of awesomeness offered by our website!