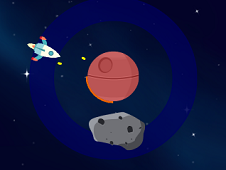 What is Rocket Gun War ?

Rocket Gun War is such a great shooting accuracy game, which challenges you to use the mouse in order to move around the planet's orbit, in order to hit this foreign spatial body, which looks like a planet, but it isn't cleary yet what it is. It's certainly that you must destroy it, making it vanish in every single level. There are so many levels, different when it comes to their difficulty so prove that you are the best spatial shooter and you can easily get rid of every single planet, in a row. You can only move around the planet's orbit, which is limited. Move the mouse in the direction you wanna go with your ship and this way you'll reach there. Click in order to shoot and in the bottom side of the game screen, there is the amount of life left for the planet in every moment. When it runs out, you've won the level. The only problem is that there will come asteroids and different bullets from the planet to you, in order to make you fail the level so dodge them by moving and acting even faster than their coming. Good luck for the last time and win this special gun war, with rockets!