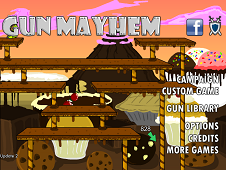 What is Gun Mayhem?

Gun Mayhem is such a great shooting adventure game, which also involves so much accuracy and action and the goal is to kill as many bots as it is possible, in different postures and gaming maps. Survival or campaign mode, it's your only choice so you decide this but whatever you would decide to play, be sure that you will definitely have an almost impossible task. There are platforms, hills, stones to climb on and next to them, some bottomless pits so once you've fallen there, there is no way to get back so you've just lost a life. In the bottom side of the game screen, there are shown to you the amounts of lives for each player so once a player ran out of them, he is dead. You can also pick up another player to work in team so this is also a 2 player adventure, for friends and fighting fellows. Pick up the falling boxes too, some important bonuses and maybe even guns for you so after picking them up, apply them in order to create and advantage for you in your fight with the opponent. It's necessary to kill the opponent as many times as it is required, in order to unlock the following maps from the game so get to the work right now and pay attention to the details!