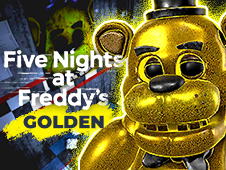 What is Five Nights at Freddys Golden?

In Five Night at Freddy’s Golden, we’re dealing with a much more mysterious entity: Golden Freddy. Golden Freddy is a mysterious animatronic that, in our opinion, is one of the scariest versions of the Freddy bear. He looks like a mixture of Fredbear and Freddy Fazbear. Golden Freddy skulks from the darkness and you must have your wits about you to survive. If you want to live through Five Nights at Freddy’s Golden, then you must adhere to the following tips.

Don’t Rely on the Security Camera Too Much

At the bottom left of the screen, you’re going to see something you can click. When you click on it, you’ll see a screen very similar to what you’ve seen in the previous Five Nights at Freddy’s games. You’ll see a map of the different rooms in the location you’re in. However, if you pay attention, you’ll notice that the security map drains. You can’t hold it out too long, as tempting as it may be.

When you look at the cameras, you’ll open a familiar security map with all the rooms. This is how you’re going to track the movement of Golden Freddy. Of course, like the earlier FNAF games, you’re unable to move and your only protection is a disguise. Remember, don’t hold the map open too long. If you lose power, then you’ll be in the dark about Golden Freddy’s whereabouts.

You Can’t Fool Golden Freddy from FNAF for Too Long

If you look at the right of the screen, you’re able to click a menu option. This menu option puts a giant Freddy Fazbear head-on. This disguise is your only means of protection, but you can’t keep it on too long. That would be too easy. You’ll notice when you put the mask on that you’ll have a neck cramp meter. While a neck cramp is a much better fate than death by an animatronic bear, you’ll only want to throw it on when Golden Freddy gets too close.

How long can you survive the night in Golden Freddy?

Use the MOUSE to play FNAF Gold.