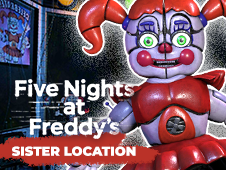 What is Five Nights at Freddys Sister Location?

You’re a late-night technician in Circus Baby’s Pizza World full of animatronics. What could possibly go wrong? Sister Location breaks up the monotony of the previous FNAF games by having each night present a new set of challenges. Your first night at Sister Location is easy. You get to look around and test the controls:

Now that you’re comfortable with how things work after the first night, it’s time for some tips on surviving the nights inside the creepy Sister Location.

Remember Your Training from the Previous FNAF Games

While Five Nights at Freddy’s does offer some new gameplay, it still uses some mechanics from the previous games. For example, during night two, you might panic a bit as Freddy approaches you in the breaker room. Remember how you can use audio to distract the animatronics. You don’t have to restart the system in one session. Take your time and restart the systems slowly.

Much like the previous Five Nights at Freddy’s game before Sister Location, you’ll need to listen for audio cues. One of the audio cues you need to focus on is the animatronics’ footsteps. If you hear footsteps, move in the opposite direction. The developers want you to have your volume on maximum because of the sound mechanics, but also because they want to get the maximum jump scare potential out of you.

There’s A Secret Ending to The Game

Use the mouse to finish FNAF Sister Location!