Sanjay And Craig The Frycade

Sanjay and Craig Messing with Noodman

Spongebob and the Squarepants Saviours of Slime 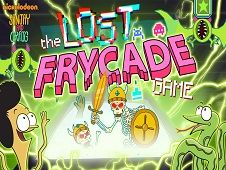 What is The Lost Frycade?

The Lost Frycade game is live starting from today here on our website, and you can find it very easy inside the Nickelodeon or the Sanjay and Craig games categories. Today dear kids, you will see that the two characters from Nickelodeon are stuck in an arcade machine, and you will be the only ones that can help them get out of it.

This is a new online arcade challenge, in which you will be playing inside a video game with Sanjay and Craig. You will only see the hands of your character, and you dear children will have to make sure that as fast as possible, you will be able to gain a lot of points by helping the Nickelodeon characters attack the monsters, duck their attacks and use their special powers to destroy their enemies faster and easier.

Inside the game, you dear kids can see that you can control the attack of the hands by using the UP arrow key on the keyboard and that you can duck and avoid all of the monster's attacks by pressing the F key on the keyboard. You will have a special power, and it can be used to attack a powerful enemy when the power bar is going to be full, and it's going to be activated when pressing the SPACE bar.

When the game starts, you will have to be very fast and make sure that you learn the controls fast because there are normal monster fights in this new challenge, but at the end of the waves, you will have to defeat one of the boss's inside the arcade game.

Sanjay and Craig will have to defeat all the boss monsters inside the game in order to escape and in order for them to keep their points and make sure that they stay as away as possible from the game over part of the game. Make sure that as fast as possible, you can give as many punches and fill up the power bar for the special attack to be active. Have fun!

Use the UP arrow key to fight. Use the SPACE key for the special attack. Use the F key to duck.