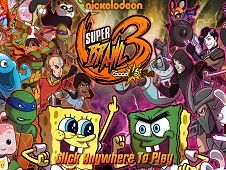 What is Super Brawl 3 Good vs Evil?

Good vs Evil from Super Brawl 3 is the newest version of brawl from Nickelodeon Games where you will meet a lot of new characters from your favorite cartoon station. First, we would like to introduce the first team, which is Sanjay and Craig a cute snake with her best friend which is a boy; this team will have a new member in Super Brawl 3 Good vs Evil, Tufflips, and Goodman, a good fighter. The second team is made by Plankton, Spongebob, and Abrasive Spongebob, which are the bad versions of Spongebob, with a green mask on his face.

Leo, Donnie, Raph, Shredder, and Mikey from Teenage Mutant Ninja Turtles are here, of course, that this team can not miss, but you will have to teach them the newest fighting skills as fast as you can. Breadwinners brothers from Nickelodeon are present in this game as well, but these two personages are not very good at the fight, so you will have to explain very good how to fight, what are the best moves and how they can win a brawl between the good and the evil. Timmy Turner and D. Crocker can not miss this game, so he is here with his friends and you can play with him as well if you like him and his team.

Our first lady is here, which is Bloom from Winx, a cute fairy which will be probably your choice if you like to move with a girl because she knows very well to fight, to jump and she has a lot of weapons. Rabbids Invasion will try to prove that they are so good at this game because they are three and they know how to fight, so try them if you like to fight with animals. Sweep and B.O.B are two different characters that are present here in Super Brawl 3 Good vs Evil, probably you will try to fight with them because they are so cute and as you will see, they know how to move there's the body.

Kung Fu Panda with Po bear will try to smash with his weight, so try to stay away from him because is a big animal that knows karate very well and another character from this cartoon is here, Master Junjie which is a cute and old fox. Avatar is represented in this game by Aang, Amon, and Tahno which is a professional fighter, you will love to fight with him because he knows very well the magic and a lot of different fighting techniques.

Legend of Korra team will be here with the main character and that's all the fighters that are present here in the newest Nickelodeon fighting game.

use the keyboard to fight.