Not So Ultimate Boss Battles 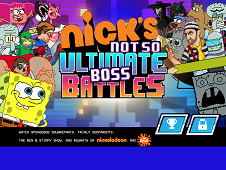 What is Not So Ultimate Boss Battles?

Not So Ultimate Boss Battles is our new Nickelodeon game where you will have to learn how to fight, how to be a winner with your best fighter from Nick's cartoon. First, we would like to present to you the most popular personages from the ultimate boss battle, which are: Spongebob Squarepants - this cartoon personage is so popular, so we don't have to talk so much about it, because we are sore that you know it. The second personage is Squidward, Spongebob's best friend which is not so good when we are talking about the fight, but we hope that you can teach him as well. Ice Cream Kitty is part of Teenage Mutant Ninja Turtles and now this strange cat will try to fight with her team, TMNT.

A cute robot is here too, his name is Fugitoid and we are happy to present you this personage, but probably you may know him from TMNT cartoons. Harvey Beaks team is present in this game too, and the first personage from this team is Fee which is a strange small girl with pink hair, but as you will see, this girl is fighting very well. Pig Goat Banana Cricket team is ready to fight with you, and the best character from this team is Goat, a cute and funny giraffe with a long neck. Henry Danger with kid danger is here to start fighting in boss battle if you like to teach him how to jump, how to use the best arms from this game.

Purple Ranger from Nickelodeon is here with his friend and his fighting team, probably you may choose this fighter because as you know the ranger team is a good fighter. Log from Nick is here too, which is a log, a wood as you may know from Nick commercial; probably you may say that this log is not so strange, but you will be surprised, try it. Theodore from Alvin and the Chipmunks will try to learn how to be a good and professional fighter, that's why he is here. Hector man with Sanjay and Craig are here as well and they will try to prove that he knows the best fighting moves, we think that he did that.

Ladybug from Miraculous is the first girl which is here to prove what she learned from Cat Noir, we know that you will love to play with her. Wayne Benvenuti and Olly Timbers are here to fight as well as they can because Bolin from Legend of Korra will try to impersonate our team. Avatar cartoons are here with Suki, Tommy Pickles which is a small baby is here from Rugtars and Fairly Oddparents are represented here by Timmy's Dad. Our last character from not so ultimate battles is Danny Phantom and we are happy to say that you will have a lot of work to teach every personage how to be a good fighter.

use the mouse to navigate and the key: