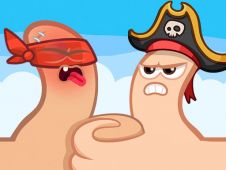 What is Extreme Thumb War?

Extreme Thumb war is a cool new game on our website in which you need to fight using only thumbs!

Extreme Thumb war is a game about timing, you and your opponent's hands are inter-locked and you 2 need to catch the opponent's thumb when he puts it down. Doing so will drop the enemy's HP and if you manage to bring the opponent's HP down to 0, you will win the round. Winning the round 3 times will also win you the whole game.

The game offers a lot of customization features, you can choose between more than 20 finger customizations. There are many popular characters you'll find there such as Hulk, Dracula the vampire, Frankenstein, Granny, Jack the pirate, and even the Queen!

The game can be played in single and multiplayer mode. In the single-player mode, you need to fight against the computer while in the 2 player mode you must fight against a real player, like your friend for example!

Time to show who's the thumb war master!