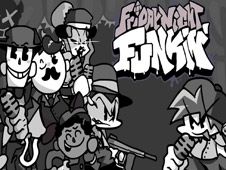 What is Elegant Night Dancin’?

Elegant Night Dancin’ is not just the latest mod to have been added into the FNF Games category of our website, which only gets better by the day, but it has quite a spin on the original games in the series, mainly because it takes a nostalgic approach to the design of the characters and their world.

Travel to the past with FNF!

Instead of the bright colors and 8bit animation that you are used to from this series, which brings us to the eighties or the boom of flash gaming, the characters in this game are depicted in black and white, and they look like they would be out of the forties.

The 1940’s in America were years where most men wore suits, women wore elegant dresses almost every night, and the mafia was running amok, with the Mafia and other gangsters being the various antagonists that Boyfriend has to defeat in the game to impress GF.

Of course, you are going to do this with songs that are reminiscent of that era, which is not something that we’ve had in the series before, that’s for sure!

Learn how to help BF win the music battles and date GF!

In the rare case that this is your first game in the franchise, know that you can play the game in either the story mode, or you can get rid of any stories, character developments, and cutscenes by playing the free play mode and just taking part in the battles.

You need to have rhythm because you will have to tap on the arrows on the keyboard when the same arrow symbols on the screen are matching so that you hit all the notes to the song correctly until the bar turns green and you win, instead of red and the opponent winning.

We’re sure you will enjoy this original mode a lot, so we hope to see you play it right now!