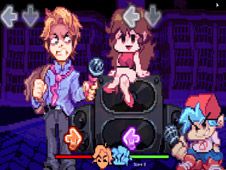 It's time for you to keep on having fun with even more of our new FNF Games of the day, just like it is going to be the case right now with Friday Night Funkin’ Duo Pack, a new take on the original game which we're sure you will appreciate since it brings on lots of cool new stuff for you to enjoy!

While most of the game is the same, including the tracks, you compete on them differently, since there are no turns, and no rests between the songs, as you will keep singing all of the time. The notes are always the inverse of your opponent's, who just did them, so always be focused, since there is no time to sit around.

Other than that, hitting the notes is done in the same way, which is by tapping the arrow keys on your keyboard when the floating arrows on-screen match with their counterparts above your character. Only by winning the musical battles can you help Boyfriend finally be with his beloved Girlfriend!

Pick between the story mode and free play mode, choose a level of difficulty, and then defeat one antagonist after another for the most fun possible in the world!