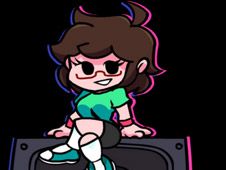 What is FNF The Weeg Mod Starring Macy?

Welcome, all to yet another new and awesome FNF mod that you should try out and have lots of fun with as only here is possible, the game being called FNF The Weeg Mod Starring Macy, and it is created by yet another interesting internet artist, one called ItIsIWeeg, and some of his friends, featuring a character developed by them called Macy, where we're sure you will have lots and lots of fun with!

Who is Macy from the Weeg Mod of FNF?

While out with her girlfriend on a coffee date, Macy meets Boyfriend, who was out with his GF, and of course, they had to battle one another in a music contest, because both of them were holding a mic in their hand, so why not?

Macy is a girl with brown hair, who wears sports clothing in black and green, including her sneakers and socks, and also wears a pair of maroon glasses. The songs you will battle her on are called Coffee Date, Electromace, and Gigavolt.

How to play FNF The Weeg Mod Starring Macy online

The main gist of the game remains the same, so you have to have a good rhythm to defeat Macy, which you prove by pressing the arrow keys on the keyboard only when necessary, which is when the corresponding arrows on the screen match one another.

The most important thing to remember is not to have too many misses in a row, because that will allow Macy to take over and you will lose. Choose a level of difficulty that is easier if you are new to the franchise, or go all out with the hard ones if you're an expert already!