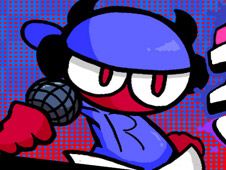 We hope you did not think that we were done with bringing you new FNF mods online on our website, since that is far from being true, something we are happy to prove to you right at this moment when our administrative team has just added for everyone the cool new mod featuring a new antagonist called Friday Night Funkin V.S. RidZak!

RidZak looks like a human fireball candy man whose hands float, wears black headphones that have demon horns on them, wears a blue onesie with an 'R' on it, a blue hat as well, and his skin color is red, just like his sneaker's. When he is in angry mode, his eyes have all sorts of crazy lines going through them, showing his anger!

The three custom songs you will fight him on this week are called Challenger, Ouch, and Ego. He has a ghost friend called Cybbr, and his biggest enemy is Mr. Cash.

This part of the description is dedicated to you, in case you are new to the franchise, and reading this to the end will help you play the game with ease!

When you see arrows that float on the screen match with those above Boyfriend's head, press the same arrow key on your keyboard at that exact moment to hit the note, simple as that!

Use the arrow keys to hit the notes.