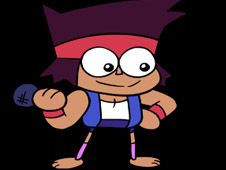 What is Friday Night Funkin vs OK K.O.?

OK K.O. from the Cartoon Network show with the same name is now the latest musical antagonist that you and Boyfriend will have to face off against in a rhythm battle on our website, something that you will do on a track known as KnockOut, where we are sure you will have plenty of fun since it's the first time you play against characters from this beloved show!

Knockout OK KO through the power of rhythm!

Like usually, watch for when arrow symbols are matching above BF's head, and, when they do, press the same arrow keys at the same time, something you have to keep on doing until the end of the song to become the winner.

Be careful not to miss pressing those keys too many times in a row, because if that happens, you lose and have to start again from scratch, and we don't want that for any of you. We hope you win, and have tons of fun!