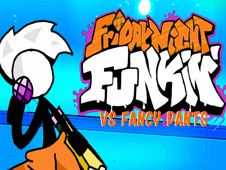 What is Friday Night Funkin vs Fancy Pants?

The Friday Night Funkin Games category of our website has been an amazing place for crossovers of many kinds to take place between these rhythm games and other kinds of franchises and media from all over the entertainment landscape, just like we're proving today with the Friday Night Funkin vs Fancy Pants mod, where Boyfriend will have a rhythm battle against the original stickman character from the Fancy Pants Games series!

Meet Fancy Pants, one of the most popular stickman game characters!

What made games with Fancy Pants as popular and cool as they were, in addition to their fun gameplay and challenging and exciting levels, was the character design of Fancy Pants, your avatar because his body might have been that of a stickman, but his hair was spiky, and, most importantly, he wore a cool pair of orange pants, somewhat baggy, which looked cool when you were jumping around the platforms in each level.

He has now ended up into the FNF universe, where Boyfriend has to defeat him in a rhythm contest, something that you will do in the custom songs called:

How to play Friday Night Funkin vs Fancy Pants online:

The gameplay is easy to understand, but you need to focus hard to execute it and win! When the arrow symbols floating over Boyfriend match with those above his head, only, and only at that time, you should press the same arrow key on your keyboard, since that is how you hit the notes of the song.

Missing to hit notes, or doing it too fast or too late counts as a miss, and having too many misses in a row causes you to lose the rhythm battle, so don't let it happen, but instead make sure to reach the end of the songs, turn the progress bar green, and become the winner, winning over not just the battle, but also Girlfriend's love!