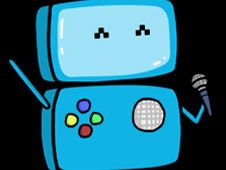 What is Friday Night Fukin vs Robo Boi BR14N?

You are once more having the chance to have lots and lots of fun with some new FNF Games online, as right now we are delighted to share with you the game called Friday Night Fukin vs Robo Boi BR14N, our latest offering to the series, where you've got all that you would want from a mod, which is new characters and new music!

Who is Robo Boi BR14N from FNF?

Well, this robot character, which looks like a GameBoy console in blue, but which has a smiling face as well as arms and legs, and with his one arm he is holding a mic, is your new antagonist. He also represents the self-insert of music producer BR14NMusic, who created this mod and its awesome songs you will play on, called:

If you're new, learn the rules of a FNF game, right here!

Since this is a rhythm game, you need to keep on hitting the notes of these songs, without missing them consecutively, because that means ruining the song and losing.

You will press your arrow keys on the keyboard at the same moment when the arrows that float over Boyfriend's head match one another, not one moment later or sooner, or it counts as a miss.

Choose your level of difficulty, and then start the fun, as only here you can have it!