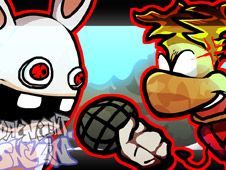 What is Friday Night Funkin’ Rayman Vs Rabbids?

Two gaming behemoths and fan favorites are now getting together in the FNF mod we offer you right now, where Rayman from the series with the same title is fighting musically against the Rabbids Invasion protagonists, who are other popular game animals. The track is called 'Rayman’s Raving Rabbids'!

Who will win the FNF battle of Rayman Vs Rabbids?

When the floating arrow symbols match above Rayman, who is on the right, you need to press the identical arrow keys to hit your notes and keep doing it until the song concludes to win while being careful not to miss your notes too many times in a row, you are going to lose if the health bar depletes. Good luck and have fun!