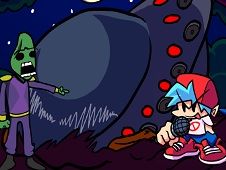 What is FNF Vs Xigmund Martian Mixtape?

One evening, while our famous couple Girlfriend and Boyfriend were walking through a forest, admiring nature and enjoying the tranquility of the forest, they heard a loud bang, which is why they went to that place to see what happened. . There they saw a Martian, a green alien, who looked like a human body, but it was green, and his clothing was a purple uniform. The alien doesn't seem to know exactly what to do, but seeing BF, he thought he could take part in a rap battle. Boyfriend took his new mission seriously because he was scared of Xigmund's presence.

Learn how to beat an alien

Use the arrows to dance.