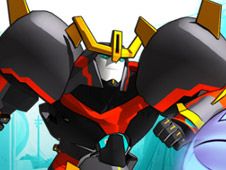 What is Transformers Super Mini-Con Striker?

Sports games and football-like games in the Transformers Games category of our website is probably not something you were expecting to see right now added for you, but you should know that we are always willing to surprise our audiences with some of the most interesting new games on the internet, just like we hope we will achieve with this one right now, a game called Transformers Super Mini-Con Striker!

Let's learn how to play football with the Transformers robots!

There will be a team of three Autobots you will control, having to win against the team of three Decepticons, in a match that will last for a total of two minutes. Use the arrow keys to move and aim, and to pass to a teammate you will press the Z key, and if you aim at the goal, shoot to score! If you want more firepower behind your shot, press and hold the Z key before releasing it.

Tackle your opponents by pressing Z when you are near them and don't have the ball! To switch between mini-cons you use the X key. If you find power-ups, grab and use them to your advantage!

Good luck to you, defeat the Decepticons in sports, as you do in battle, and save the universe, having fun like never before you've had in this category!