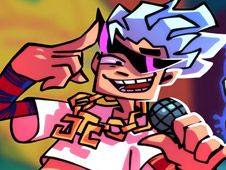 What is FNF vs JTC?

Get ready once more to have fun with new FNF Mods online for free as only on our website you get to find day after day, hour after hour, with this latest version of the game bringing some new characters and new music to boot, so missing out on a game such as FNF vs JTC should be out of the question, no doubt about it!

The word cool is not random in the name of this character, because he is really stylish and has a really cool demeanour, with him wearing some cool street clothes and a really awesome chain, glasses, and, his most distinctive trait is his blue hair. When he saw Boyfriend and Girlfriend strolling through his funky town, he challenged our protagonist to a rhythm match, since there can only be one guy with blue hair!

Help Boyfriend face this new character and defeat him in his three custom songs called Funk Off, Ping-Pong, and I'm Blue. Let's teach you how to do it, no?

When you see the arrows floating around Boyfriend match with those on top of his head, the same arrow needs to be pressed by you on the keyboard, at the same time, so that you sing all the notes of the song correctly, but know that if you are too late or too early with hitting the notes, it's a miss, and consecutive misses means losing the game. Good luck to you, we hope you win, so focus, and give your best!

Among vs Creeper
ADVERTISMENT