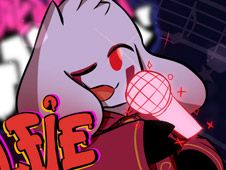 What is Friday Night Funkin Vs. Alfie + Ralsei ?

Two characters in one mod is always a great idea, which is why we could not have missed the opportunity of sharing with you all the new and awesome FNF mod called Friday Night Funkin Vs. Alfie + Ralsei, where these two new and really cool characters bring along awesome new custom songs, and lots of fun for you to have!

Meet Alfie and Ralsei, so that you can defeat them with ease in the rhythm battle!

Alfie is a goat who wears a red hoodie with some ancient Asian symbols on it, with a bell hanging on it, and dark long pants, him being called a master of the musical arts, and one of the most zen characters in the series. His three custom songs are called Forest-Fire, Goat, and Spectral-Sonnet.

The other antagonist is called Ralsei, and he comes from Deltarune, another goat-like humanoid creature, this one with black fur, a green poncho with a heart on it, and a witch hat also in green. Ralsei only has one song, and it is called Vs Ralsei.

How to play and win at FNF Games online:

In this rhythm game where you have to help Boyfriend defeat both these characters, you have to take all the songs to their conclusion and hit all the notes of them along the way. When arrows match above Boyfriend's head, press the same arrow on our keyboard, and if you time it right, you continue.

Be careful, because if you miss hitting too many notes at their right time in a row, you lose and have to start all over again. Good luck, enjoy, and we hope you will continue playing our awesome new games of the day!