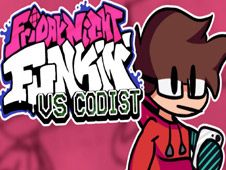 What is Friday Night Funkin Vs Codist?

Codist is the self-insert character of the coder who has made this mod, and he is a boy wearing flip-flops with white socks, grey pants, a red hoodie, he has glasses, and in one hand he has a microphone, while in the other one he has his phone. Out of nowhere, Boyfriend and Girlfriend appeared in his bedroom, so now they are having a musical battle of rhythm on the songs called Pixels, Error, Am I Ok.

How to play Friday Night Funkin Vs Codist online:

Of course, to become the winner of this battle, just like in our other FNF Games, what you do is have to turn the progress bar to your favor by the time you reach the end of the song, and for that, you are going to use the arrow keys.

How? Well, when arrow symbols match above BF's head, press the same ones on your keyboard, so that you play or sing the note, and make sure to get both the key and the timing right.

Be careful not to press the wrong keys or miss the timing for too many notes in a row, since that would mean you eventually lose the game, and you can't want that to happen, right?

You will have tons of fun in this FNF game with Codist, which we hope you start right now, and then you continue with even more amazing games this category has to offer!