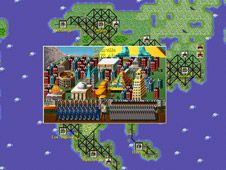 Civilization 1 is not only the first game in the Civilization Games series that so many people have loved over the years, but it is also one of the best simulator games online you will play here because we're sure that most people don't have the hardware needed to play this classic game that first appeared in 1991, but on our website, we can emulate it for you, and offer you one of the best strategy games experiences in the world!

Create the greatest civilization in the world, right now!

You will start by picking one of the fourteen available civilizations that you can start and grow through this game, all coming from various parts of the world, such as the Roman Empire, Ancient Egypt, the Native Americans, various countries in Asia, and many more, with your goal being to take them all the way from the Stone Age to a Modern World.

Yes, you will start by developing the people who are very primitive, introduce technology, grow their territory, help them build better housing, better facilities, help them get healthier, more educated, taking them through the normal progress of civilization, just like historians have found out about our own real-life peoples.

You can play in a level of difficulty of your choosing, so pick one according to your previous experience with the game, pick the type of animation you want in the game, and pick setting such as if you will use the mouse, keyboard, or both of them, after which you will start.

Become the leader of a civilization, develop it to its highest state of being, and have fun like only on our website you get to have!

Use the mouse and keyboard.