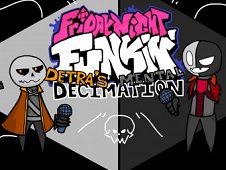 What is FNF vs Detra’s Mental Decimation?

Friday Night Funkin '- Detra's Mental Decimation is the new mode created by SkullZMinus, in which you will be able to meet a new mysterious character against whom you will have to fight on 7 new rhythms. In order to win each battle you will have to prove to us that you are very good at the reaction time because you have to press the corresponding buttons as fast and as accurately as possible; every move you make incorrectly will score you, and in this way, your opponent will win the match.

Who is Detra’s Mental Decimation from FNF?

In the game, you will meet two characters (the second character is evolved from the first), and in the first week you will have four new songs, and in the second week (entitled BONUS), you will have three new songs with the second character. In the first part of the game the main character is gray, with black clothes, and over the gate a cape of orange, and the eyes are orange, and in the second level is bicolor, half of the front is black, and the other half it's gray. The dress is a more complex one, with a pair of black pants, a cape on the upper half of the red body, and a red tie around his neck.

-Well meet. No need for introductions, this will be over soon enough. Just know that I've taken the liberty of giving you a fighting chance. Your preferred method of battle seems to be..music?

-Forgive my intrusion on your dreams again, but I am in dire need of help

-I'll explain more later, we need to work together. You've proven to be better at this than I, si I'll follow your lead

Use the arrows to beat Mental Decimation!