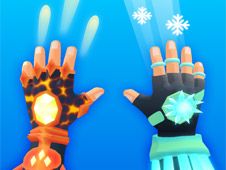 Today you are going to become a superhero once more, one that uses one of the most coveted combinations of powers in the world, and that is the ability to use both ice, as well as fire, but since ice is going to be your main weapon against the many enemies you encounter, the name of the game is Ice Man 3D, just like your avatar's!

Use the ice shooting from your hands to defeat your enemies!

Gangsters, mobsters, thugs, and all sorts of other shady figures are going to attack you, coming towards you from various directions, but they are not prepared for you to be able to shoot ice at them and freeze them up, which is what you are attempting in this game, using the mouse to slide in the direction you want to shoot ice.

After they are frozen up you will activate the second hand, with which you shoot fire blasts at them in order to destroy the block of ice they have become, and get rid of all your enemies to clear a level, with their numbers increasing level by level.

You also need to be careful of the ones that will shoot cannons or other weapons at you, since they need to be dealt with before they can inflict damage on you too much!

We hope you have fun in this new superhero role, and we hope to see more of you here, you won't regret it!