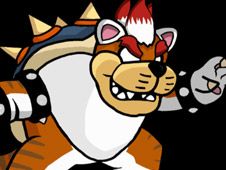 One more time today you are invited to have the most fun possible by playing the new Friday Night Funkin Games online on our website since we know how much you love this category, or otherwise, the games from it would not get so many plays as they get, day after day, and today's addition brings us back into the world of Mario Games, but with a twist!

Get familiar with the FNF vs Meowser mod, so you can easily win it!

Bowser is the turtle-like creature with spikes on its shell and fire-spitting abilities that is the main antagonist and nemesis in the world of games with Mario, but today you will not challenge him to a rhythm battle, but, actually, you will go up against Meowser, who is the same character, only it also has elements of cats and felines, so it's quite the new character.

The game only has one song, but three characters are going to pop up during the medley, with the main one being named in the game's title. Reach the end of the song and turn the progress bar green to win! Press arrow keys when the same symbols match but don't press wrong too much in a row, or you lose!