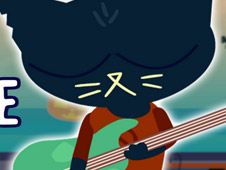 A Night in the Woods is the inspiration to the latest FNF mod online for free that you can find and play here, as right at this moment we are delighted to share with you all the game called Friday Night Funkin Band Practice, where you will go up against the guitarist cat from this original indie game if you play in the Week 1 series, which is where the character has been replaced.

Of course, rhythm and timing are the keys to this game, where you will use the arrow keys. For what? Well, when arrow symbols above BF's head match with one another, that is when you have to play the same note, so to do it you are going to press the same arrow on your keyboard, simple as that.

Be careful not to hit the wrong keys, or get the timing wrong too many times, because if that happens too much, you will lose because you've messed up the song. Good luck to you, and we really hope this is far from the final new FNF mod you play here for free!