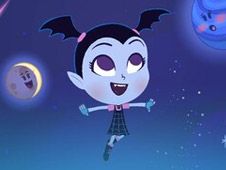 What is Soaring Through Space?

Vampires in space can only be a good idea, even more, if we're talking about the cutest vampire on the block, none other than Vampirina from Disney Junior's show with the same name, a vampire girl who moved from Transylvania to Pennsylvania together with her family, and today she is going on a space adventure, something you are going to join her in by playing our new game called Soaring Through Space!

Fly through space with Vampirina!

The first planet that you visit with this cute character is Mercury, after which you visit other planets in the solar system, such as Mars, Saturn, Neptune, the other planets, and even the Moon.

Vampirina is going to fly in her bat form, with you using the mouse to tap on the screen in order to help her fly up, and when you don't tap, she is going to slowly descend.

As you fly forwards, collect as many stars as you can, since they represent your score, and avoid obstacles and traps that might appear, such as the wind whirls.

You only have three lives at your disposal, so don't lose all three of them, or you lose the game. Good luck to you, and we hope that this will be far from the final new game of the day you play here today!