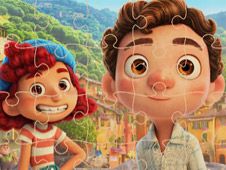 What is Luca Jigsaw Puzzle?

Luca is the newest animated movie from Disney to be released this summer in theaters and on streaming for children and families all over the world to watch, something we are positive they are going to do as soon as they premiere, and if those kids then want to play Luca Games online, they will immediately be able to do it on our website, where right now we added the wonderful game called Luca Jigsaw Puzzle!

The awesome thing about this game is that despite its title, there are actually jigsaws for you to solve here, twelve in total, each of them showing a different screenshot taken from the movie, and the first six are already unlocked, and the other six you will unlock as you keep on playing.

The puzzles can be solved in either the easy, medium, or hard levels of difficulty, with each of them having a different number of pieces. You will use the mouse to pick up the pieces after they've been spread around, and then you put them together until the puzzle is finally done.

Good luck, we hope you have a relaxing and fun time as well, and we hope you stick around for more fun to come!