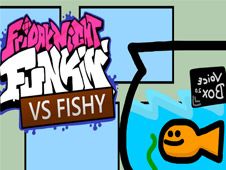 What is FNF vs Fishy?

Sometimes, rap battles for Boyfriend come out of nowhere, which is how the one from today has happened, because he is facing off against Fishy, a goldfish from a pet store, a fish who thinks he has the skills to challenge and defeat Boyfriend, so show him that is not happening, and help him defeat him! This cool new mod features three custom songs we believe you will love:

Prove you've got a better rhythm than a goldfish, right now!

You can play this game in either the story mode or free play mode, and in both of them, you are aiming to hit the notes of the songs according to their charts, reaching the end of the songs, and singing so well that the progress bar has turned in your favor.

To achieve this, use the arrow keys, pressing them at the same time as the arrow icons floating above the BF match, but don't get that wrong too many times in a row, or you lose the whole game and have to start again! Enjoy!