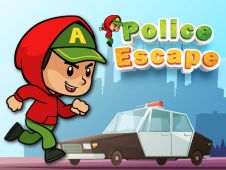 What is Police Escape?

Thieves and cops have always been the center of attention when this couple appeared in an online game, which is why we thought we would offer you another game with thieves and cops in which you will have to be the thief this time.

In order to be able to integrate as well as possible in this game, you will have to be as agile as possible, to avoid the obstacles you have everywhere and at the same time to show us that you can react as quickly as possible to an eventual danger.

Running, obstacles, and the police on your trail

When you start this crazy race, you will have to be very careful and try to run as fast as possible so that you are not caught by the police who are following you. As you can see, in front of you you will always have obstacles that you will have to avoid. Obstacles will often be jellies, various objects, or even steps that you have to jump. If you fail to escape in time, the policeman running after you will catch you and arrest you, and eventually, you will end up in jail with the other prisoners again.

Use the mouse to jump over obstacles.