FNF vs Perry the Platypus 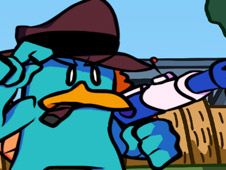 What is FNF vs Perry the Platypus?

Perry the Platypus is without a doubt one of the most iconic cartoon characters of the 2010s and further because he was an integral part of the Phineas and Ferb franchise from Disney Channel, one of their biggest hits in recent years, with this character that is an animal who lives his days as a normal pet, and when he is not seen he is a secret agent being one of the most beloved ones in the show.

Boyfriend Vs Perry, the musical battle of the summer vacation!

When you see that arrow symbols above BF are matching with one another, it is at that moment you also have to press the same arrow keys, and you have to keep doing so until the end of the song to win when you will see that the progress bar has been tilted in your favor.

Be careful about missing the notes, because if you do that too many times in a row, you lose the whole battle and have to start again, something we don't wish for any of you. Instead, we wish you all the best and good luck!