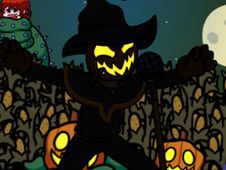 What is FnF vs Zardy v2 Bushwhack?

Zardy, a famous scarecrow from the FNF Games series is back, and this time he brings along another scary character for you to battle, a character named CableCrown, who is sort of like his cousin, and in this brand new mod you will have two original songs to battle on:

Defeat the scary scarecrows using the power of rhythm and music!

You are going to see that arrow symbols float and then match above BF's head, and when that happens, you need to press the same arrow keys yourself and keep doing it until the end of the song in order to win. Be careful not to miss pressing the keys too many times in a row, or you will lose.

Choose between the story mode and the free play mode, pick a level of difficulty, and then focus, get all the notes of the charts, and have fun. Don't forget to check out even more of our games afterward!