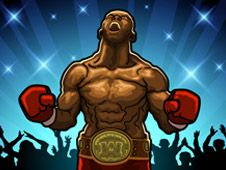 What is Boxing Stars?

If boxing games online is something that you like playing, then there is no better place to do it than our website, where right now we are delighted to share with everyone the game called Boxing Stars, one of the coolest mobile-friendly such games we've had in a while, one that we believe would be a true shame if you were not to check out!

Become the best boxer, and shine among the stars of this sport!

From the main menu, you can not only modify the look of your boxer, but you can also use the money you earn from fights to upgrade four of his stats and make him more powerful so that you can win fights against stronger opponents:

You start off by being able to box in the Underground levels, but then you will be able to advance and unlock the other leagues as well, such as:

As for how you control your boxer, move using the right and left arrow keys, A for knockdown punch, S to block enemy attacks, and D for knockback punching.

The more fights you win, the more money you get, and the better boxer you can become, something we hope you do until you have won all the leagues, boxing fights, and have had the time of your life!