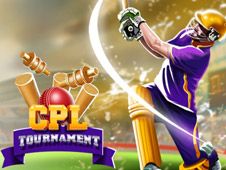 If you've not already realized from the game's image, CPL stands for Cricket Pro League, which is the official league where all the best cricket teams in the world compete against one another, and now it is time for their annual tournament to see who is the best. Luckily for you, if you play our game called CPL Tournament 2020, you get to take part in the action as well, something we will teach you how to do right now and here, as we know for a fact not many of you are used to playing cricket games online!

Get your cricket on, and have fun!

From the main menu, you pick if you want to take part in a Single Match, which we recommend for a start if you are a beginner, or if you want to play in the Cup Series.

You will then pick the city from India that you want to represent, and while the player will look the same, their gear will be different, so pick whichever one you like most.

You are playing the role of batter, so, just like with baseball, tap on the screen to swing the bat and hit the ball coming towards you, scoring points each time you hit it.

If you miss even one time, you lose the whole game and have to start it again, so be careful not to let that happen, but instead try hard to get a big score. Enjoy!