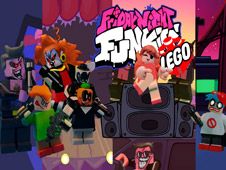 What is Friday Night Funkin’ LEGO?

Well, playing FNF Games is already a ton of fun on its own, but when we have remakes such as Friday Night Funkin’ LEGO, we know it is a good day from that alone since this is a mod where the game is just like before, with all the characters you know and love returning, but, instead of being their regular selves, they have been turned into Lego figurines.

Boyfriend needs to win over Girlfriend and stay with her by defeating various antagonists, such as her parents, assassins, video game characters, spooky kids, and others, all in a total of six weeks, each with their own rival and songs, and you can face them with dialogues and cutscenes in the story mode, or picking songs at your own will from the free play mode.

Either way, play the notes of the songs according to the charts, so when arrow symbols above BF match one another, press the same keys yourself. Keep at it until the song ends, but be careful not to miss pressing the keys too many times in a row, since that will lead to you losing. Enjoy!