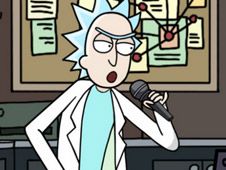 What is FNF vs Rick Sanchez (Rick and Morty)?

It has been a long time coming, but it seems that Rick Sanchez from the highly-popular world of Rick and Morty has finally used his green portal gun to travel to the universe of Friday Night Funkin', where it seems that he immediately challenged Boyfriend to a musical battle! Rick might be a genius scientist, but Boyfriend is a genius musician, so help our favorite protagonist win on all the following songs:

Boyfriend Vs Rick, the battle of blue-haired geniuses!

As you will see, these original songs taken from the show are playable in either the story mode or free play mode, and that choice is yours, with the goal being the same in either, which is to reach the end of the songs by playing all their notes according to their charts.

To do this, when floating arrow symbols match with that above BF, you need to press the same arrow keys yourself, but remember that if you miss doing it too many times in a row, you eventually lose and have to start again. Enjoy!